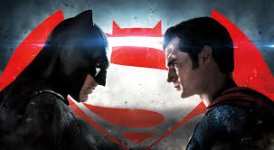 In the hype of the "Snyder Cut" of Justice League, I thought I'd watch the prior film of the franchise to familiarise myself with the story, as well as finally see the 3-hour long, R-rated (though it barely feels that much more violent than the PG-13 version), director's cut of Batman V Superman: Dawn of Justice.

When Batman V Superman was first coming out, the hype was practically uncontainable. This was the rivalry DC fans, or even comic book fans in general, have waited decades to see on the big screen. However, despite making nearly a billion dollars, the film, unfortunately, fell flat on its face as critics panned the movie for its dark tone, inconsistent writing, and its desperate attempt at beating Marvel in the contest of cinematic universes by throwing too many ideas together to build up hype for potential future movies.

Fans, on the other hand, were a bit more lenient towards promoting the film. Aside from some agreeably dumb moments, fans felt satisfied with their offerings in the film and praised it for its achievements. Clearly, audiences and critics were split, but the promise of an extended cut of the film, provided with 30 minutes of unseen footage, gave promise to whoever didn't enjoy the film that there might be a version of the film coming that fills in the gaps the theatrical cut left empty.

Most people would agree that the Director's Cut (better known as the Ultimate Edition) of Batman V Superman is easily superior to the theatrical cut of the film. It answered plenty of unanswered questions from the original version, gave fleshed-out scenes and characters that felt rushed and hallow more depth, and, for the sake of it, added more violence and blood to certain scenes (because Zack Snyder, baby). But one must still ask: Is there a "good" version of this movie, or just a better one?

While many issues still haunt this film's Knightmares (get it?), I find the Ultimate Edition to be a surprisingly helpful asset to the movie's benefit. It covers small but significant notes in the movie's story, tone, and pace that make it feel more coherent and less like a series of unfortunate events. While I still prefer this film fleshed its ideas across more films, as well as allow a lighter tone to Superman's character, and I still find the "Martha" scene to be pretty stupidly written (though I can see how slightly better writing/direction could have made this scene better and allow audiences to understand what that scene was actually supposed to mean), I still find this film to be quite more entertaining and understandable that the theatrical cut.